I'm a little late posting this, but last Sunday, Valentines Day, me and Tina took a trip to Tokyo to watch the Seigaku vs Yamabuki musical for the final (my 9th and 10th) times.

I can't start this entry any other way than to talk about how completely unlucky my day was. Like, seriously. XD
First, I got my umbrella out because there was a little rain and I didn't want to get wet at all. About 30 seconds after I put it up, this huge gust of wind blew it inside out and broke it. I tossed it away, and because it was barely raining, decided not to stop by the combini to buy another (the weather forecast said the rain would stop soon and I didn't want to have to carry around one all day). Of course, it then started to rain SUPER HARD.
Because the rain was getting bad and we didn't want to stand around, Tina suggested we make a run for it across the road as the light was going to go red soon. So, we ran. I got basically to the sidewalk and then there was this plastic slightly raised thing on the ground that I guess was one of those things to help blind people. I stepped on it with my shoes that have no grip whatsoever, and just slid. I landed right on my backside on the wet ground. It didn't really hurt too much so I stood up and got properly on the sidewalk. Then I remembered. MY PHONE. It was in my back pocket. I pulled it out, opened the cover and was greeted by a smashed screen. I only had this phone since October and I was so sad (I got it fixed pretty quick by going to the Apple Store the next day, but still...)
In Tokyo Dome City Hall, I almost managed to fall through a door that looked like a wall (honestly, why would they do that...), and also tripped over the carpet at some point too. You would think by then, I would have had enough bad luck right? Right?
For the second show, I got in line to get my fanclub postcard, just like I had the first time. I had decided to choose one of the Seigaku postcards but at the last minute I decided to change to Yamabuki. Maybe something was drawing me towards Lucky Sengoku since my day had been so unlucky. Then, while waiting at the front of line, the girl in front of me chose Yamabuki and got a handshake coupon. I figured the chance of two in a row wasn't that great, so changed my mind again. For some reason, even though I should have gone back to my original Seigaku choice, somehow I went for St. Rudolph (even though I have 3 already, compared to two of all the others) and got nothing. Then Tina swooped in behind me, chose the Seigaku one I had originally planned on, and got a handshake coupon. XD MY LUCK. It was my own fault that time though for being too drawn to the St. Rudolph postcard (those guys suck for being so handsome).
ANYWAY, despite all my bad luck that day I had been determined that because it was the last time I was going to see the musical, I was going to enjoy it to the fullest. And I really really did. A few things that made this show different:


Of course, the other different thing about this show was the postcard we received. Which was one of our big reasons for wanting to see it again in Tokyo. I got the same postcard after both shows, but I managed to trade the first one for Ryoma/Akutsu which was the one I had wanted most. I tried to trade the other Tezuka/Muromachi one for the St. Rudolph doubles one, but we got out of the theater pretty late and by then most people had traded already, so I couldn't get one. But still, I got THE ZAIKI TAKUMA so it can't be too bad. 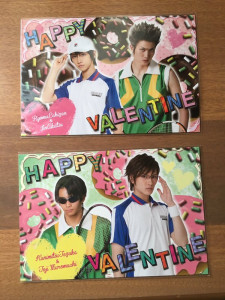 Despite not getting a handshake ticket this time, I was at least really really happy that Kenya was in my final omiokuri. I gave him a heart as I had the previous time, and he gave me this huge goofy smile and blew me a kiss. After all my bad luck that day, it ended with an amazing lucky moment like that. I just wanted to flail and thank Kenya for making up for all the bad luck I had (I thanked him in his blog later). By the way, Kaisei was in the first show's omiokuri so I got the complete set! I also gave Kaisei a little heart and he kind of grinned and waved harder lol. That cute smile of his.
So, with that, it's over. I saw this musical 10 times and even after seeing it so many times, I didn't get bored. There's so many different things to focus on each time, and with all of those different adlibs, and the omiokuri, there's always something new. Honestly I've talked about this musical so much that I don't even know how to talk about it any more, but just a few general points:


I'm sure there's more but I have to finish this blog or it'll keep going forever. Anyway, next is the Team Lives and Dream Live!
Collapse